All art is at
BIG BALD GALLERY 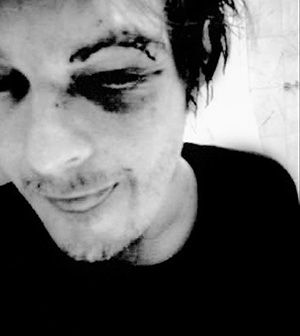 Reedus is best known for playing the role of “Murphy MacManus” in the cult movie THE BOONDOCK SAINTS, written and directed by Troy Duffy and starring Norman opposite Sean Patrick Flanery and Willem Dafoe. He also starred opposite Flanery again in the sequel BOONDOCK SAINTS 2: ALL SAINTS DAY. He was recently seen starring opposite Naomi Watts and Matt Dillon, in the indie drama, SUNLIGHT JR, which premiered at the 2013 Tribeca Film Festival. He also appeared in the Robert Redford directed feature, THE CONSPIRATOR, which chronicles the trial after the assassination trial of Abraham Lincoln and in Michelle Danner’s indie, HELLO HERMAN. Additional past film credits include the sci-fi feature thriller PANDORUM with Dennis Quaid and Ben Foster, the Sony feature CADILLAC RECORDS opposite Adrien Brody., SIX WAYS TO SUNDAY, 8MM, BEAT, DEUCES WILD, BLADE 2, GOSSIP, THE BALLAD OF BETTIE PAGE and AMERICAN GANGSTER.

Reedus is also an accomplished photographer as well as a burgeoning director having directed three short films. In October 2013, he released THE SUN’S COMING UP… LIKE A BIG BALD HEAD: PHOTOGRAPHS BY NORMAN REEDUS, a book of his photography.